I’m starting a new series, just finished the first painting. I am very excited about this series….and it’s origins. As hard as I tried, I just couldn’t come up with anything new. So, I gave up and went camping . When I stopped trying, took a break and was just having fun with my doggies at the lake…..Whoosh, the whole series came pouring in. I mean, Everything all complete and fully developed. The title of the series, the concept, painting images, their titles,etc. The ancient Greeks believed our Muse was a separate entity from us where our inspiration come from. If the ideas were good, it was the credit of the muse. And if they were bad, it wasn’t our fault. I’m a true believer now. Here’s an older painting from the previous series, RELEASING THE MUSE, 60×32″ 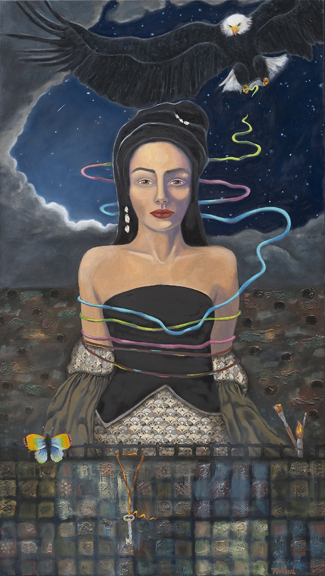